Model for integration and innovation

2019 will go down in Fasihi’s corporate history as an important and successful year: Our company has increased its sales by 12.4 percent to 8.1 million euros. Due to the good order situation, we hired 12 new employees – two of whom were trainees and given permanent employment after completing their training. “We are very satisfied with the past year,” says chief executive Saeid Fasihi. “The success is due to our customers’ trust in our portal solution and the great commitment of our dedicated and competent staff.”

The completion of the new company building, the relocation of staff to the new premises and the inauguration ceremony with the Prime Minister of the Rhineland-Palatinate, Malu Dreyer, were among the outstanding events in 2019. “With this new company building we have set the course for the future,” says chief executive Rolf Lutzer.

The visit by Dreyer and further guests of honour, such as Dr. Christoph Wegner, head of Digitalization & Information Services at BASF SE, and the Ludwigshafen mayor, Jutta Steinruck, at the inauguration ceremony in September was much appreciated by Fasihi and Lutzer. “The great attention with which we are met shows that we are perceived as an innovative and successful company. We are very pleased about that.”

Fasihi Enterprise Portal® in use internationally

The Fasihi Enterprise Portal® represents our self-developed solution for the optimization and digitalization of business processes, which continues to enjoy great popularity. Among other things, it is in use at the world’s biggest chemical company, BASF SE. Around 80,000 users worldwide use around 80 of our portals in their daily work.

We are an important strategic partner of BASF, which is reflected in a long-term contract. The Fasihi Enterprise Portal is an incredibly great product. The company has recognized at an early stage what the market expects in the long run: a trend away from closed systems towards modular platforms, emphasized Dr. Christoph Wegner at our inauguration ceremony.

We were also noticed in the daily newspapers of the region. The “Rheinpfalz” reported on us in 2019 and described us in a report as the “Dream partner of the big players”. And the “Mannheimer Morgen” was entitled: “A successful story of integration”.

Training courses for customers and staff at Fasihi Academy

As in previous years, in 2019 the Fasihi GmbH again invested a lot of time in further training for its employees. New colleagues were prepared for their future tasks in the company-owned Fasihi Academy, while long-standing employees were regularly trained and brought up to the latest state of the art.

Customers from various industries were trained by the Academy’s specialists primarily in the use of the approximately 80 portal solutions with which more than 80,000 users work. “Constant further training is indispensable if we want to be successful on the market in the long run. We must always be up to date with the latest web technology and pass on our knowledge to our customers,” says chief executive Rolf Lutzer. “Since we have numerous enquiries for portal solutions, we urgently need more staff.”

We have taken on social responsibility by supporting several initiatives and projects. In February 2019, for instance, our company launched the project “IT2School – Discover IT together” from the Wissensfabrik – Unternehmen für Deutschland e.V (Knowledge Factory – Companies for Germany) at the Karolinen-Gymnasium in Frankenthal. Pupils in grades six and seven participated in project lessons during which they were familiarized with topics relating to the Internet, digitalization and programming.

This school year an employee of our company is also supporting 26 pupils in the fourth grade of Kirchheim-Kleinkarlbach primary school in a school project to teach programming called IT2School.

On Girls’ Day 2019 on March 28, six girls from grades 9 and 10 of the Karolinen Gymnasium in Frankenthal and one student from the Von Carlowitz Realschule Plus in Weisenheim am Berg came to our company to gain interesting insights into a medium-sized software company.

This and many other things were highlighted in a detailed report by the business magazine “econo” and presented in the article “Model for integration and innovation”. 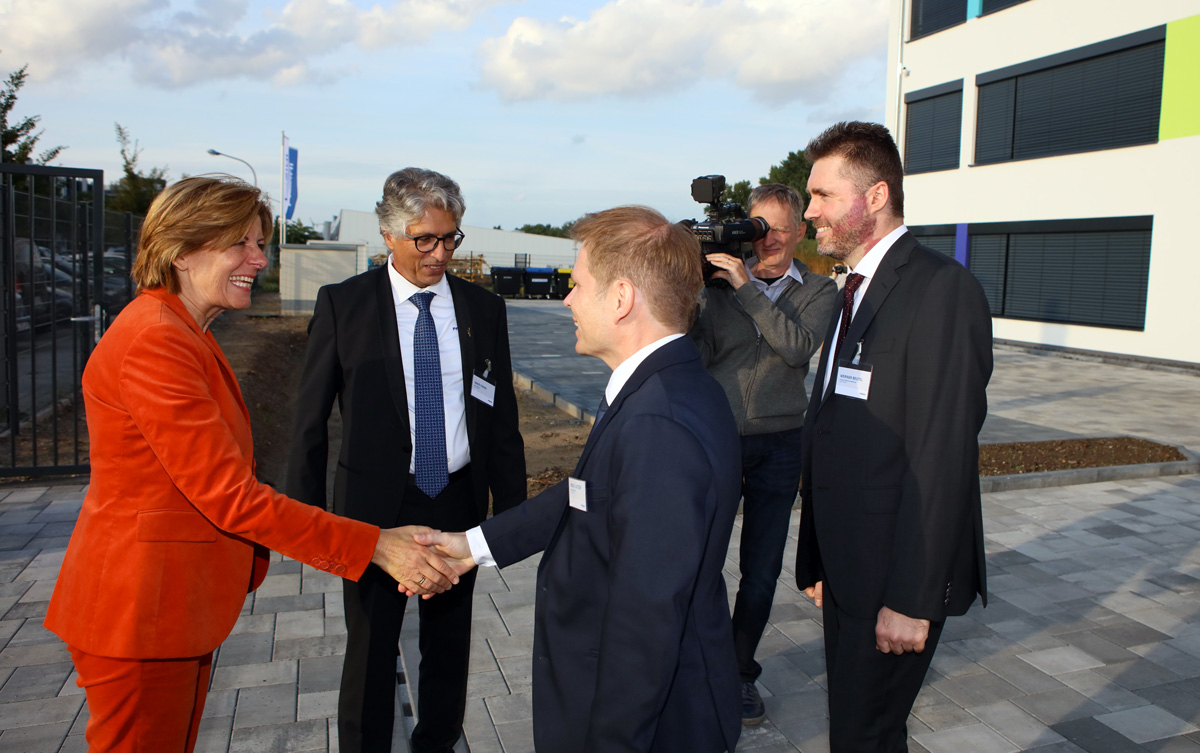 The Prime Minister of the Rhineland-Palatinate, Malu Dreyer, was a guest at the inauguration ceremony of our new company building. The picture shows our chief executives, Saeid Fasihi and Rolf Lutzer, as well as our authorized signatory, Werner Beutel.Foto: Fasihi